We have been in this industry long enough to see trends come and go. Heck, we have even seen companies come and go. Lately, one of the trends in the industry is the selling of single surface consoles. These can seem appealing, as they are different from the first generation consoles that were dual surface, but which option truly provides more benefits? Let’s take a look at the origin of the dual surface console as well as what’s needed today:

Why Was the Dual Surface Console Designed?

The dual surface idea was created due to the complete lack of ergonomics the old dispatch consoles had. Most of the older consoles were just old metal cabinets that were designed to hold the radio equipment; they weren’t created to fit the dispatchers. And, they sure as heck did not go up and down.

The first generation of ergonomic consoles were created by Michal Wright and sold through his company MOWCO. These were originally designed to hold 1-3 CRT monitors and maybe two keyboards, the consoles had a hanging keyboard arm mounted off of the monitor surface which moved up and down. This was needed because the older lift columns would not go low enough.

At that time, the purpose of a dual surface conosle was to try and get the keyboard and mouse low enough to fit shorter people at their best elbow height. To do this, the keyboard surface tilted. (We all later learned that the tilt did not hold up to the abuse of a PSAP). Ergonomic research shows that the keyboard surface needs to lower to 22” from the floor to fit the 5th percentile female at 4’10”. Take it from me, it’s not an easy task to design for that specification in a heavy-duty 24/7 environment.

The next generation of consoles, built by Xybix, had lift columns and two movable surfaces that were designed to with more support than a hanging keyboard arm. These moved the specified range, going down to 23” and up to 46” to meet the standards that the ergonomic professionals recommended. The main goal here was to get the keyboard’s surface low enough for the users elbows to be at a 90 degree bend to the keyboard surface.

Because the monitors at that time were quite small, around 17’’ tall, there were never many engineering issues when it came to getting the monitors low enough to meet these ergo standards. Well, that has certainly changed...

Most monitors in a modern control room are 24”, and with the CAD companies adding more monitorsevery day, it seems command centers are needing to double stack the monitors. This means it’s critical that the monitor surface responsible for holding the monitors is able to be lower than the keyboard surface. The single surface design does not allow the monitors to move low enough so that they will sit beneath the keyboard’s surface.

This is where the dual surface design becomes necessary when purchasing any new consoles. The design allows the dispatcher to get monitors low enough to meet the ergonomic standards, which also improves sight-lines around the dispatch room, and is a great benefit if you are supervising when an incident occurs.

At the end of the day, when it comes to taking care of your dispatchers’ health and well-being, it should be high on your list of priorities to make decisions with sound ergonomic recommendations in mind. 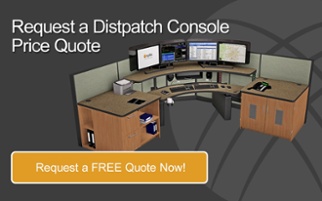