How to Hit a Home Run with Acoustics in Your Comm Center:

This past week I was sitting at home flipping through the TV channels, and I found myself involved in the first round of the Home Run Derby contest. The rules to this game are very simple; the players hit as many home runs as they can in a specific amount of time, and the players with the most home runs move onto the next round. It sounds simple, right? However, the further the players advance, the more tired they become, and I can only imagine what the players’ arms feel like when it gets down to the final two contestants..

As the rounds moved along, I really began watching and listening to the sounds of the game. The sound of the ball coming off of the wooden bat had such a nice “crack” or “knock" to it. (The cheering from the crowd as the ball cleared the fence was another sound in itself.)

However, I began thinking. Why don't Major League Baseball players use aluminum bats like the college players do? You can go online and find many discussions regarding the use of aluminum and wooden bats; some of these discussions examine durability, distance, safety, etc., but the one topic that caught my interest was the noise coming off of these bats. The difference between a solid “crack” or “knock” from a wooden bat and the “ping” and “bounce back” effect from an aluminum bat really is very distinct. Listen for yourself:

When I began reading a little further into the sounds of the game, I found this article written by Dr. Daniel A. Russell who has a Ph.D. in acoustics from Pennsylvania State University. He wrote the following:

"The most obvious difference between wood and aluminum baseball bats is that wood bats go "crack" when they hit a ball while aluminum bats go "ping." The figure at top left shows a plot of a microphone recording of the impact sound of a bat held at the handle and struck with a baseball at approximately the sweet spot. The sound of the wood bat has a relatively smooth frequency spectrum representative of broadband noise resulting from a short impact. The aluminum bat has almost the same smooth spectrum except for two very prominent peaks, one around 2200 Hz, which is more than 60 dB above the noise floor, and the other around 2800 Hz. The reason for this difference is that the barrel of an aluminum bat is essentially a hollow cylinder. As a result, aluminum bats have several unique cylindrical vibrational modes not found in wood bats."

As this contest moved onto the later rounds of the derby, I thought about how the sounds of the game could relate to the sounds of a 911 dispatch center. While the majority of the time you're not cheering or cracking bats in a comm center, it can still get very loud with voices raising, phone lines ringing, and dispatchers communicating with one another. So, if your center is loud, why would you want to bring more "ping" into your comm center with aluminum workstations considering all of the other noise you're currently trying to alleviate?

To make the noise level more favorable for 911 dispatchers, we can take some of Dr. Russel’s findings and apply them to the acoustics in a comm center. Here are some simple tips to help reduce the presence of unpleasant and distracting sounds to allow for optimal concentration:

Reducing the noise in a 911 dispatch center is an important part of creating a work environment where dispatchers can focus in on their tasks, and it also helps reduce the likelihood of hearing-related issues later on. If you design your center with the ideal acoustics, you should have no problem making the atmosphere of your communications center a real home run. 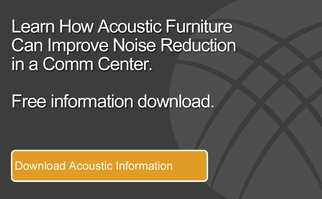