A Review of Imaging Desk Manufacturers at 2016 RSNA

With another year of RSNA is behind us, we have had a weekend to rest up and now it is time to go back to work. With over 20 years of building and selling height adjustable desks for imaging centers and 24/7 markets I always like to cruise the show floor and see what is new each year at RSNA.

If you were shopping around for imaging desks hopefully you saw all of the players.  If not, this might help you compare one from the other.  Please note: This is my opinion and my opinion only.

Overall this year there was not a lot of new products, just lots of refinements from some of the desk manufacturers. What amazes me is how few of the booths have actual computers and monitors running at the desks. This is a critical component for shoppers to see what their imaging desk will look like when it's 100% wired up. Any desk can look great without the cables for monitors, CPU's, mice and keyboards.

Redrick was in the North Hall. Redrick had about the same booth as last year. Clean good looking desks, but with no actual monitors just metal simulated monitors. So where do all the cables run? The color scheme was good for a reading room with black everything to reduce any reflections or glare.

Redrick did have a new desk on the right side of their booth. This was for the Rad Flow Space and it looked like a vision of what the future may hold. This desk did have working monitors. The drawback was, you could see all of the cables, computers, and structure, basically an open skeleton of a desk. This desk aslo had an offset keyboard surface which was white.

ErgoTron Anthro was also in the North Hall. They had their classic Carl’s Table along with a less expensive Steve’s Station. The new product Anthro has was a mix of the Steve’s Station with the heavy duty lift columns from the Carl’s Table. This allowed for more monitors on one level which seems to be the trend in the reading rooms, bigger monitors and more of them.

Biomorph was also in the North Hall. If you were shopping, you could find all of the vendors pretty close to each other relatively speaking for such a large show.  Biomorph had actual monitors at their desks, but they did not power them up or have any cables. They did have a mix of single surface, dual surface and a single with a keyboard arm. Their work surfaces look great with no rubber bumper edge.

AFC Industries was in the South Hall pretty close to the front. They also did not have any monitors on their stations. Cable management is a big part of a high quality imaging desks and shouldn't be ignored when showcasing your product. AFC had about 5 desks and a nice video wall at their booth.

Xybix Systems, Inc. was in the North hall right across from the huge Philips booth.  This is my company and I take great pride in our booth. It takes a lot of work to get the booth space designed, built and running for the show. We spend the time to wire-up live monitors so everyone can see the imaging desk in a real world situation.  Xybix had three stations two dual surfaces and one single surface. The dual surfaces work best for multiple users and is what we sell the most of. The single surface works well in a single user environment like a house.

The biggest take-away I saw from this year's imaging desk vendors is that having a live working desk with monitors and cables can really tell a lot about the end solution you'll be getting. Think of it as a an empty package, without the insides, its just a box. Don't you want to know if you're getting the whole package? 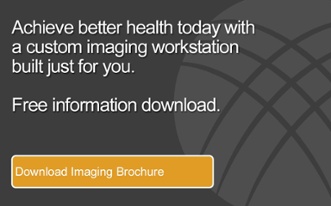